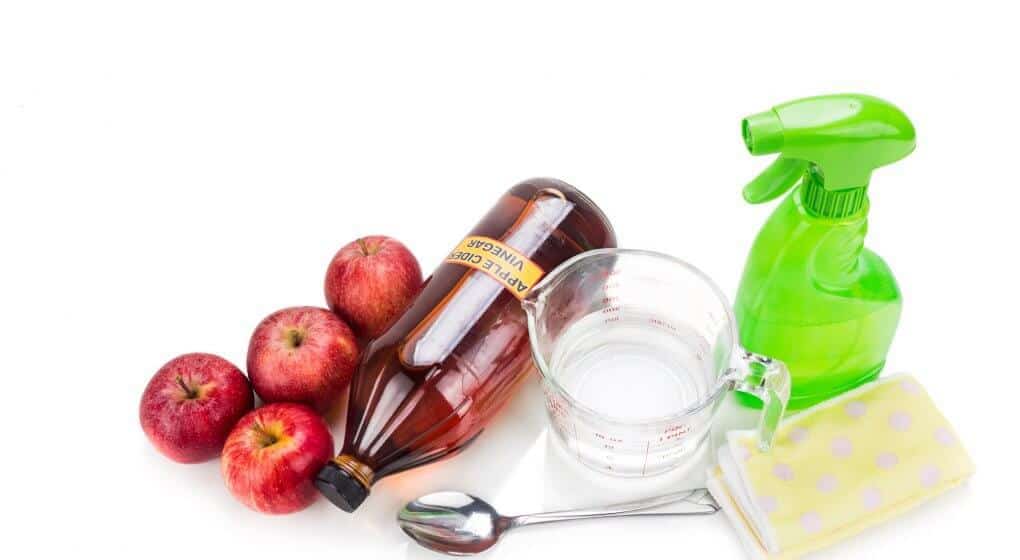 Over the last few years apple cider vinegar has taken the world by storm, increasing in popularity at a very rapid rate.

This has come with the suggestion that it can promote weight loss, help improve blood sugar levels, reduce blood cholesterol, improve skin health, and even kill bacterial, fungal, viral, and microbial infections.

It really is being described as a modern-day panacea.

With this in mind, it has also become quite the household staple due to its suggested ability to kill bacteria, where it is said to offer a much cheaper alternative to many potent chemical products.

Apple cider vinegar is a unique compound that is the direct result of a two-part fermentation process.

First up, apples are crushed and their liquid is extracted – essentially creating organic apple juice. This apple juice is then combined with yeast, water, and specific strains of bacteria, and then left to ferment.

This is the first fermentation, and it results in all the sugar found within the apple juice being converted to ethanol.

During this second fermentation, strands of ‘mother’ bacteria also form in the apple cider.

And it is actually a combination of this acetic acid and this specific bacteria that is said to provide apple cider vinegar with its unique cleansing properties.

Bed bugs are oval, wingless insects that are dirty brown in color, and grow to approximately 5mm in length. They are poorly regarded because they feed on warm blooded animals (such as humans…), and  are extremely difficult to remove.

With this, one of the many suggested uses for apple cider vinegar revolves around the removal of bed bugs, with some individuals going as far as to suggest that it is even more effective than traditional cleaners and pest removal methods.

Interestingly, the acidic qualities of apple cider vinegar do appear to kill bed bugs in an acute sense. Taking this into consideration, it may act as a first point of removal in which you can use it to douse the bed bugs to kill them off.

After which it is in your best interest to soak the bedding and mattress in some more potent cleaning products to ensure they do not return [1].

Mold is a specific type of fungus that is typically found in warm, damp areas, and spread by releasing spores into the air (which then repopulate and grow). Mold can be quite difficult to get rid of, as the spores are highly resilient and can survive even the harshest of environmental conditions.

Apple cider vinegar has known anti-fungal properties, which has led to the suggestion that it may offer us an effective method to remove mold in certain situations – something that has appeared true in some capacity.

Apple cider vinegar provides a way to kill and remove mold from non-porous surfaces (such as tiles), and as it is nontoxic, does provide us with a safe and efficient option [2].

It is important to note however, apple cider vinegar is thought to be about 80% as effective as some of more powerful chemical compounds available on the market (such as bleach or ammonia), and may not be the best solution for heavily mold infested areas, or for use on porous surfaces (such as wood).

Scabies is an itchy and highly contagious skin disorder that is caused by an infestation of itch mites which burrow and lay eggs within the outer layers of the skin. This leads to intense itching, a pimple like rash, and can even result in scales and blisters if left untreated.

In a similar fashion to bed bugs, the acidic properties of apple cider vinegar mean that it can be used to clear the skin of a scabies infestation [1].

As a bonus, many of the compounds found within apple cider vinegar have been shown to stimulate a process known as chemical peeling. Chemical peeling describes a process where acidic compounds remove damaged and irritated outer layers of skin, while promoting the growth and regeneration of new skin cells [3].

As a result, apple cider vinegar may not only remove the itch mites that cause scabies, but also treat the skin damaged caused by those itch mites.

A parasite essentially describes an organism that lives either on or in another organism (known as the host organism), and survives by obtaining nutrients at the others expense.

With this in mind, apple cider vinegar may offer an effective way to remove parasites that live on the skin, as it can be applied directly onto the parasite. Within this, its application will increase the acidity of their environment beyond a level that is tolerable for the parasites survival.

The way in which it treats itch mites is a perfect example of this [1].

But, for those parasites that live within the host, apple cider vinegar offers us very little benefit. This is because once consumed, it passes through the digestive system and loses its acidic properties, rendering it useless.

Similar to bed bugs, fleas are a small wingless insect that feed on the blood of mammals and birds, and can cause severe skin irritation if left unchecked. Unfortunately for their host organisms, fleas are designed for survival, and can be extremely difficult to remove from the skin.

Taking this into consideration, apple cider vinegar is not actually potent enough to kill fleas off, but it does have the potential to create an unpleasant environment for fleas, making them less likely to settle on the animal in the first place [4].

As a result, it is best used as a preventative treatment to be applied to the dog’s skin on a weekly basis, as this can significantly reduce their risk of getting fleas.

For well-established fleas, an essential oil option like cedar oil or a traditional chemical option is a much better alternative, as it is potent enough to kill the fleas entirely.

While apple cider vinegar definitely meets some of its lofty claims, it may not be the cure all that some people suggest.

With this in mind, it does appear to have the capacity to treat scabies completely, kill bed bugs, prevent fleas, and eliminate certain types of mold – although it is important to note that in each of these cases (with the possible exception of scabies), a high quality traditional chemical option is likely to be more effective.

If you have had any experience using apple cider vinegar at home, we would love to hear about it – so please drop us a comment ad we will get back to you ASAP.

3. Kapuścińska, Alicja, and Izabela Nowak. "Use of organic acids in acne and skin discolorations therapy." Postepy higieny i medycyny doswiadczalnej (Online) 69 (2015): 374-383. From:

I contracted an ectoparasite that lived on my scalp. It was a little pink worm. I began using an Apple Cider Vinegar Shampoo and taking it in capsule form a few months ago and have finally rid myself of these.
Have you ever heard of this? Do you know what this parasite might have been called. I think I picked it up at a hairdresser, one popular with Asian people and I wonder if it might be from one of their countries. It cannot live on any other part of the body but it tried, eventually drying up.
I see signs of it on many and would so like to get the word out.
Thank you.