When it comes to boosting health and function, natural remedies are currently all the rage.

Now this is (for the most part) a good pretty good thing. These natural health boosters don’t contain any pharmaceutical grade compounds, they are non-toxic, and the way in which they are produced places very little burden on the environment.

But on the downside, not all of them work. 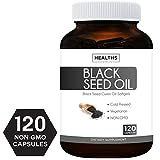 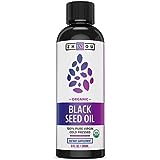 One natural health remedy that has made a bit of a resurgence of late is black cumin seed oil, a specific compound that has appeared in traditional eastern medicinal practices for centuries.

What Is Black Cumin Oil?

The Nigella Sativa plant is a small flowering shrub that grows natively throughout eastern Europe, the middle east, and most of western Asia.

While this particular shrub is most commonly recognised for its delightful purple flowers, it also produces fruits that contain tiny black seeds – and it is these black seeds that have been used in health remedies for eons.

In modern day these seeds are pressed to create black cumin seed oil (also known as simply ‘black seed oil’ in certain circles). This oil can either be consumed orally, or applied to the skin topically, where it is suggested to improve various aspects of health through a number of different mechanisms.

What Are the Benefits of Black Cumin Seed Oil?

Given its growing popularity, we wanted to take an objective look at the research surrounding black cumin seed oil to determine whether it is indeed as effective as people claim – and I must admit, we were pleasantly surprised.

Asthma essentially describes inflammation within the bronchial tubes of your lungs, which in turn limits airflow into the lungs. While the symptoms vary in intensity dependant on the severity of the disease, it often leads to difficulty breathing, chest pains, and wheezing.

As black cumin seed oil contains potent anti-inflammatory properties [1], it has been suggested to alleviate the signs and symptoms of asthma – although it is important to note that it should not replace traditional medications.

Eczema is a term used to describe a group of highly similar skin conditions that cause the skin to become inflamed and itchy. Within this, eczema is often easily identified by a nasty rash and associated discomfort.

The application of black cumin seed oil onto eczema infected skin has been shown to cause large improvements in skin health and quality, combined with reductions in both redness and itchiness [2]. This is thought to be due to the potent anti-inflammatory and antimicrobial properties that black cumin oil exhibits.

Our gut is full to the brim with bacteria. To put it in simple terms, this bacteria can either be described as ‘good bacteria’ or ‘bad bacteria’. Good gut bacteria enhance digestive processes, protects our body from parasites and other foreign organisms, and improves immune system health – while bad bacteria ultimately does the opposite.

Black cumin seed oil contains potent antifungal and antibacterial properties that have the potential to shift the ratio of good and bad bacteria in a positive manner, while also reducing any potential gastrointestinal inflammation. Through these mechanisms we can see large improvements in digestive health and associated declines in gastrointestinal discomfort [3].

In conjunction with the above point, black cumin seed oil has also been shown to assist in the removal of the nasty bacteria Helicobacter pylori (or H. pylori, for short).

H. pylori is a specific bacterial strain that can enter the digestive tract and wreak havoc with the body’s systems. Within this it has shown strong associations with an increased risk of irritable bowel syndrome, gastric cancer, and gastrointestinal dysfunction.

Fortunately, the consumption of black cumin seed oil has been shown to assist in the eradication of this harmful bacteria, protecting the gut in a big way [4].

Candida is a specific type of yeast fungus that is typically found in small amounts within the gut. While this is quite normal, this particular yeast can begin to grow and populate uncontrollably, leading to overpopulation and infection.

As black cumin seed oil contains potent antifungal and antimicrobial properties, it has been shown to act as an effective treatment for a candida infection [5].

Black cumin seed oil contains a key compound known as thymoquinone, which has been shown to exhibit an anticancer action on tumorous cells, through a number of different mechanisms [6].

While this has led to the suggestion that black cumin seed oil may offer an effective cancer treatment, more human research is required to say this with any real certainty.

Despite this, early research in animals does show promise, suggesting that black cumin seed oil may be used in conjunction with traditional cancer medications to help stop the spread of cancerous tissue.

The antioxidant properties of black cumin oil have been suggested to exhibit a relaxation effect on the smooth muscle tissue found within the bodies many veins and arteries. Additionally, it has also been hypothesized to improve the efficiency of the heart, improving its capacity to move blood around the body [7].

Through these two mechanisms, black cumin oil has been shown to cause significant reduction in blood pressure, and a subsequent increase in heart health.

There has been some research to suggest that black cumin seed oil can reduce systemic inflammation and improve the state of the digestive system. Through each of these actions, we are likely to see a reduced amount of stress placed on the immune system, which can lead to improve immune system function [8].

Methicillin Resistant Staphylococcus Aureus (MRSA – or also commonly known as staph) is a common bacterial strain that is normally carried on the skin. However, sometimes they can overpopulate and cause both serious illness and nasty infection (known as a staph infection).

As black cumin seed oil exhibits powerful antifungal properties, it has been shown to kill MRSA in a laboratory setting, leading to the suggestion that it may assist in the treatment of an MSRA infection – although more research in humans is needed before this can be said with certainty [9].

Black cumin seed oil actually exhibits both antibacterial and anti-inflammatory properties. As a result, when applied to the skin, it has the capacity to reduce the redness and swelling associated with acne, while also reducing its severity.

This makes it an option for those looking for a completely natural way to prevent and treat acne plagued skin [10].

As mentioned above, the anti-inflammatory and antioxidant properties of black cumin seed oil have been shown to improve upon skin disorders such as acne. Interestingly, these same properties have been suggested to enhance the health of the skin while also hydrating the skin cells themselves.

Through these mechanisms, black cumin seed oil has the potential to improve general skin health in a big way when applied to the skin [10].

With this in mind, black cumin seed oil has been shown to cause improvement in insulin sensitivity while also lowering resting blood sugar levels – all of which contribute to improved metabolic health and reduced risk of diabetes in a very big way [12].

Herpes is a common virus that affects the mouth and genitals, leading to painful red sores appearing at the site of infection. As black cumin seed oil has been shown to exhibit powerful antiviral effects, it has been suggested to improve the symptoms of a herpes infection [13].

It is important to note that while these effects have been shown in the laboratory, there is no human research to support this suggestion – as such, it should not replace traditional medication, but should be used synergistically with that medication.

Considering that black cumin seed oil can reduce fat and glucose absorption from the food we eat, it therefore has the ability to reduce the amount of energy we absorb from the food we eat, while also making fat more readily available as a fuel source within the body (which is a side effect of improved insulin sensitivity) [11, 12].

As a result, over time the consumption of black cumin seed oil can help promote weight loss – especially when combined with more traditional diet and exercise strategies.

Given the positive effects of black cumin seed oil, we wanted to give you some high-quality options that you can integrate into your lifestyle easily and effectively. These offer what we believe to be the best black cumin seed oil products available on the market at the moment.

This top-quality product by Amazing Herbs is one of the most popular black cumin seed oil supplements on the market.

Providing you with nothing but 100% pure cold pressed black cumin seed oil, this product is manufactured using the highest standards, and is completely free of pesticides, gluten, and preservatives.

Healths Harmony are another excellent company that are well known for producing great products at very reasonable price points – something that is paramount within their black cumin seed oil capsules.

This is a great option for those looking for a simple supplement that comes in capsule form (rather than as an oil) so it can be taken easily and efficiently every day.

When it comes to organic remedies, ZHOU are one of our favourites supplement companies. Consistently putting out top quality natural products, they are hard to look past in any situation. 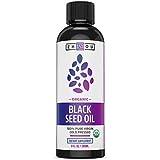 With this option they provide us with top quality 100% cold pressed black cumin seed oil at a very decent price point, making it a great option for those on a bit of a budget.

What Is the Best Dosage for Black Cumin Seed Oil?

There has been a little bit of conjecture around the appropriate dosage of black cumin seed oil within the health industry of late, with dosage recommendations of anywhere between 1ml and 10ml of oil appearing within the literature.

With this in mind, a serving of 5ml (or 1 tablespoon) per day appears to be enough to elicit the positive health effects associated with black cumin seed oil consumption.

Does Black Cumin Seed Oil Have Any Side Effects?

For the most part, black cumin seed oil appears to be a relatively safe option. There is a small percentage of the population who are likely to be allergic to the compound, in which case consumption may result in gastrointestinal discomfort. In these same individuals, application to the skin may lead irritation and a rash.

If take in excessive dosages, black cumin seed oil may also result in nausea, bloating, and gut distress – so stay within the recommended daily dose.

It is also important to note that the safety of black cumin seed oil is yet to be established in pregnant females. As a result, to err on the side of caution, we strongly recommend you avoid its consumption completely during pregnancy.

Each and every week a new and improved herbal remedy seems to hit the market – many of which have grand claims but demonstrate minimal real effects.

Fortunately for us, black cumin seed oil truly appears to be the real deal. With research suggesting that it has the potential to protect against disease and illness, improve heart and metabolic health, improve skin quality and treat skin disease, and even promote weight loss, it really is a miracle supplement.

If you have had any experience using black cumin seed oil, we would love to hear about it, so please drop us a comment and we will get back to you ASAP.

2. Yousefi, M., et al. "Comparison of therapeutic effect of topical Nigella with Betamethasone and Eucerin in hand eczema." Journal of the European Academy of Dermatology and Venereology 27.12 (2013): 1498-1504. From: