How to Get Rid of Masked Chafers (Natural & Organic Methods) 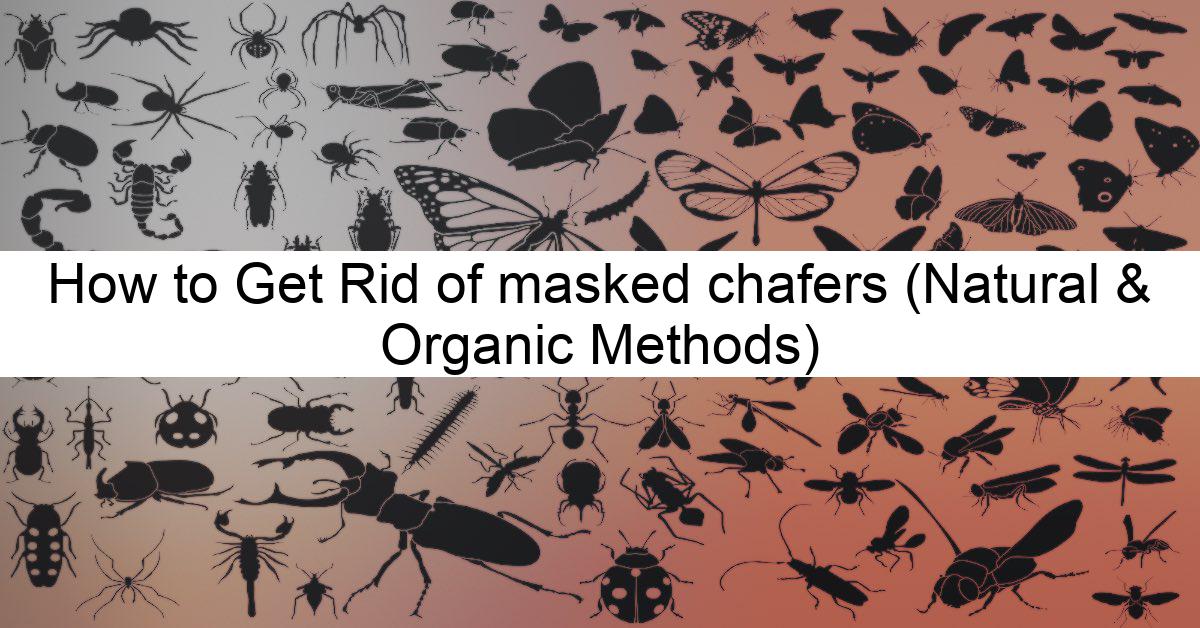 The masked chafer is a type of June beetle that is native to the eastern United States. In the adult stage, they are approximately ½” long, brown/tan in color, and have a distinctive “mask” or crescent shape on their wing covers. The larvae, or grubs, are C-shaped, cream colored, and have 3 pairs of legs.

The masked chafer is considered a turf pest because the larvae feed on the roots of grass, resulting in damage that can range from thinning and yellowing of the turf, to complete browning and death of the grass. In addition, the larvae can cause damage to other plants in the landscape, such as trees and shrubs.

The best way to control masked chafers is to prevent them from laying eggs in the first place. This can be done by maintaining a healthy lawn and keeping it free of debris and thatch. If you do find grubs in your lawn, there are several insecticides that are effective at killing them.

Beneficial nematodes are a great way to get rid of masked chafers. You can purchase them online or at your local nursery. Once you have them, you will need to mix them with water according to the package directions. Then, you will need to water your lawn with the mixture. The nematodes will seek out the grubs and kill them.

To get rid of masked chafers, mix together 1 tablespoon of neem oil and 1 teaspoon of dish soap in a small bowl. Add 1 cup of water and stir the mixture together. Next, put on some gloves and apply the mixture to the affected areas of your yard, using a brush or sprayer. Be sure to thoroughly soak the soil, as this will help to kill the chafer larvae. Repeat this process every 7-10 days until the problem is gone.

Insecticidal soap contains active ingredients that are derived from plant sources. This soap is used to kill insects and their larvae on contact. It is considered to be a “softer” pesticide as it breaks down easily and does not persist in the environment like some synthetic pesticides. Insecticidal soap is most effective when applied directly to pests and their eggs.

Insecticidal soaps are an effective way to get rid of masked chafers. The soaps work by smothering the insects and disrupting their cell membranes. This can be done by applying the soap directly to the chafers or by adding it to a sprayer and spraying the chafers. Be sure to read the label of the insecticidal soap to make sure it is safe to use on the plant you want to protect.

Insecticidal soap is an environmentally friendly alternative to traditional pesticides. It is made from a combination of soap and water that is mixed with an insecticide. The insecticide is typically a natural substance that is safe for humans and animals, but is lethal to insects. Insecticidal soap is most effective when used on small, soft-bodied insects that are susceptible to dehydration.

As one of the most common pests in North America, the masked chafer is known to attack a variety of plants, including annual and perennial flowers, vegetables, and small fruits. The adult masked chafer is a bronze-colored, 6 to 8 mm long beetle with a smooth, rounded body. larvae are whitish, legless grubs that grow up to 12 mm long. Masked chafers are most active from late May to early July, although adults may be present in June and July.

To get rid of masked chafers, mix 1 tablespoon of horticultural oil with 1 gallon of water. Apply the mixture to affected plants, making sure to coat the undersides of the leaves. Apply the oil in the early morning or evening, when temperatures are cooler.

2. What do masked chafers look like?
Masked chafers are dark brown or black, with a characteristic "mask" marking on their heads. They are typically between 10 and 15 mm in length.

4. What do masked chafers eat?
Masked chafers are primarily scavengers, feeding on a variety of dead and decaying matter. However, they will also occasionally feed on live plants, causing damage to crops.

5. How do masked chafers reproduce?
Females lay their eggs in the soil, and larvae hatch from the eggs after a few weeks. The larvae go through several molts before pupating and emerging as adults.

6. What are the major Predators of masked chafers?
Masked chafers are preyed upon by a variety of animals, including birds, reptiles, and mammals.

10. What are the consequences of not controlling a masked chafer infestation?
If left uncontrolled, masked chafers can cause extensive damage to crops. They can also spread disease and pathogens, which can be harmful to humans and animals.

How to Get Rid of Tobacco Budworms (Natural & Organic Methods)

How to Get Rid of Tree Borers (Natural & Organic Methods)

How to Get Rid of Rootknot Galls (Natural & Organic Methods)

Alfalfa Supplements: What You Need to Know

Alder Buckthorn Supplements: What You Need to Know