▷ How to Identify and Get Rid of Potato Bugs

How to Identify and Get Rid of Potato Bugs

Gardening
Written by Alan Ray and updated on August 1, 2018 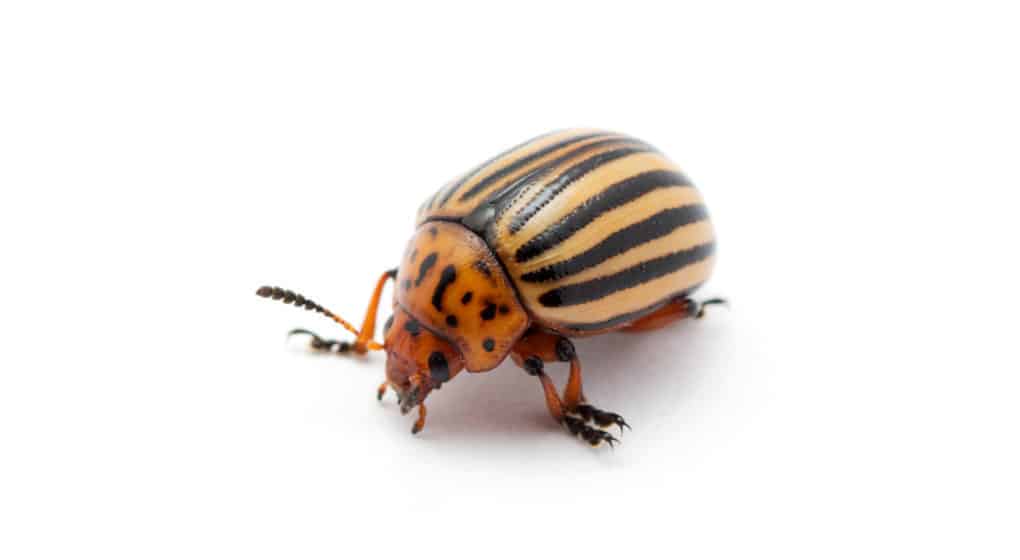 With the growing season upon us, Organic Daily Post is constructing plant-specific articles addressing how best to protect your backyard Garden of Eden from plant damaging insects. These easy to read and informative articles show you what to look for to know if your garden has been bugged. We tell you what the bad bugs look like, a little about them, and offer tips on preemptive measures you can take. In addition, we tell you how to get rid of them once they arrive.

By Any Other Name

Whoever first uttered the words “don't bug me,” may well have been a gardener. Bugs, pests, insects invaders, whatever you want to call them, these garden gorgers have plagued farmers and gardeners alike since time immemorial. Knowing what to look for when it comes to these enemy invaders will help you get the most from your garden regardless of its size.

The subject of this article is potato bugs.

Potatoes are by far the most popular vegetable grown in America but rank fourth in crops grown around the world behind maize (corn), wheat, and rice. According to the Idaho Potato Commission, around 13 billion pounds of potatoes are grown in the United States every year.

Be it baked, mashed, fried, or chipped, Americans consume an estimated 117 pounds of potatoes per person, per year. While that may sound like a lot, Europeans consume nearly twice that amount, or over 200 pounds per person, annually.

When it comes to potato plants, the only creature that can rival that consumption figure is the potato bug, although they mostly eat the leaves and not the potato itself.

Meet the Beetles (well, one anyway)

This destructive little beetle is less than half an inch long and is easily recognized by its yellowish-orange body sporting five stripes on each of its two elytra (wing cases). Its tough shell strongly resembles a striped seed with legs and a head. For being only 3/8 of an inch in length, potato bugs are voracious eaters. They can damage a plant in very short order and even kill it if left on.

The potato beetle grows from egg to adult in just about three weeks. Full-grown larvae burrow into the ground to pupate (transform to adults) in the soil and become active in the spring as the temperature rises. Once they emerge and complete reproduction duties, the female lays clutches of orange eggs in batches of a couple dozen or so on the underside of the leaf. When these eggs hatch, they feed on the leaves of the host plant.

Interestingly, something in the potato bug's DNA attracts them to plants of the Solanaceae, or nightshade, family of plants that include peppers, tomatoes, potatoes, and eggplants. For the leaves of the potato plant, potato bugs are double trouble as both the adult and larvae feed on them.

The Jerusalem cricket is a strange-looking, nocturnal creature that also feeds on plants of the Solanaceae family. Cousin to the grasshopper, it has a bulbous, yellow head, six legs, and a black, circular-striped body. It is wingless and a slow mover most times, especially during the breeding season. It is not aggressive but can deliver a painful bite when irritated.

In addition to its scary looks, the Jerusalem cricket is somewhat of an enigma in the insect world. With their 'humped back,' they classify in the camel cricket family although technically they do not classify as a cricket. It is also not from Jerusalem but lives in the western portion of the United States. If you live east of the Texas border in the U.S. you are pretty safe from them.

Most potato bugs feed above ground but the Jerusalem cricket is an exception. These strange creatures feed below ground and dine on the actual roots and tubers of the potato and other plants. Like the Colorado potato beetle, they gravitate to plants of the nightshade variety. Peppers, eggplants, tomatoes, and potatoes can have considerable crop damage if the insects are left unchecked.

After mating, the female will sometimes kill and eat the male. Later, she will dig a shallow hole in the ground with her spiny back legs and deposit her eggs there. When hatched, the larvae chow down on the roots and tubers just like their parents did.

What to Look For

You don't need a degree in entomology to spot trouble in the garden. The telltale signs of leaf damage from these pests can be quite evident. Curled leaves that are beginning to brown and show signs of stress are easy to spot. You can be sure they have become a meal when the leaves look like the green material has been removed, leaving only netting.

The potato bug is a survivor and possesses the uncanny ability to quickly become pesticide resistant, making it very difficult to treat with insecticides. This doesn't mean you can't deal with them, however.

So what can you do? Yearly crop rotation in the spring and fall seasons helps to kill them off when you till them into the soil. Another effective measure is to plant early potatoes that you can sow sooner than others. Use species that mature within 75 to 90 days - before the potato bugs kick it into high gear. While there are many varieties of potato deemed early season producers, time and space allow mentioning only a few you may consider planting.

A popular heirloom variety is the Irish Cobbler potato. It is believed to have originated in Ireland and first grown by Irish cobblers in the mid-1800's. This little potato not only matures early but also tastes delicious.

The prolific Red Norland falls under this category of early producers along with the King Harry, which is actually resistant to Colorado potato beetles.

One of the best ways to control potato bugs is through regular inspection of your plants; daily if possible. Checking out the underside of the leaves of your plants for potato bugs and their eggs will help keep the damage in check. It doesn't take long for these bugs to harm your plants, so stay on top of your inspections.

When you do spot a potato bug on a leaf, pick it off manually. How you destroy them is up to you. The same goes for eggs found on the back of leaves. Remove the leaf if damaged too badly, and be sure to crush all the eggs underfoot or toss them and the bug into a pail of soapy water. Admittedly, this may be difficult to do with a larger garden.

For a preemptive strike and further maintenance, a solution of soapy water with some cayenne pepper mixed in is a good deterrent. You can apply this mixture through the use of a spray bottle. You should spray it directly onto the plants' leaves (both sides). Repeat as needed, especially after a rain.

Biologically, there are a few natural enemies of the potato bug. Stinkbugs and ladybugs enjoy dining on the eggs of these insects and the fungus Beauvaria bassiana will kill both adults and their larvae. But unless you have them already, don't count on them for much help. They can only eat so much and are less effective in large gardens where the potato bug population can be great.

Baccilus thuringiensis, also known as BT, is a naturally occurring bacterium mixed in a commercial solution that is available to the home gardener. When applied, it is toxic to potato bugs.

Our hope is that you garnered enough information to get you jump-started on detecting and protecting your beloved plants from these enemy invaders. Follow some of the guidelines posted in this article and you'll be well on your way to growing and maintaining a healthy garden all summer long.

How to Choose the Best Greenhouse Kit

Alan Ray is an independent writer who has experienced an eclectic career. He co-created and was the Head Writer for a reality television series as well as composing and producing the Theme song. He has written radio comedy, specials for National Public Radio, hundreds of blogs and no end of gardening and how-to articles spanning a galaxy of topics from aquaponics to the history of the flush toilet. He has also worked tirelessly on countless projects that went nowhere.Additionally, Alan spent years in recording studios in Nashville, Tennessee, where he worked as a staff songwriter for various music publishing companies. He is both a multiple BMI Award recipient and ASCAP award-winning songwriter, respectively. He has also written 5 books and is a New York Times best selling author (Non-Fiction/Humor). While touring the country doing book-signings, he did over 700 live radio interviews with every major radio station in the nation as well as the BBC and Radio Free Europe.Currently, he is a regular contributor to this site in addition to two of the top gardening magazines in Canada including a Medical Marijuana magazine and also a B2B mag.He enjoys small town life in southern Tennessee where his time is spent writing, messing with plants and laughing a lot with his lovely and quick-witted wife.