▷ Rosacea 101: How to Avoid and Common Treatments

Rosacea 101: How to Avoid and Common Treatments 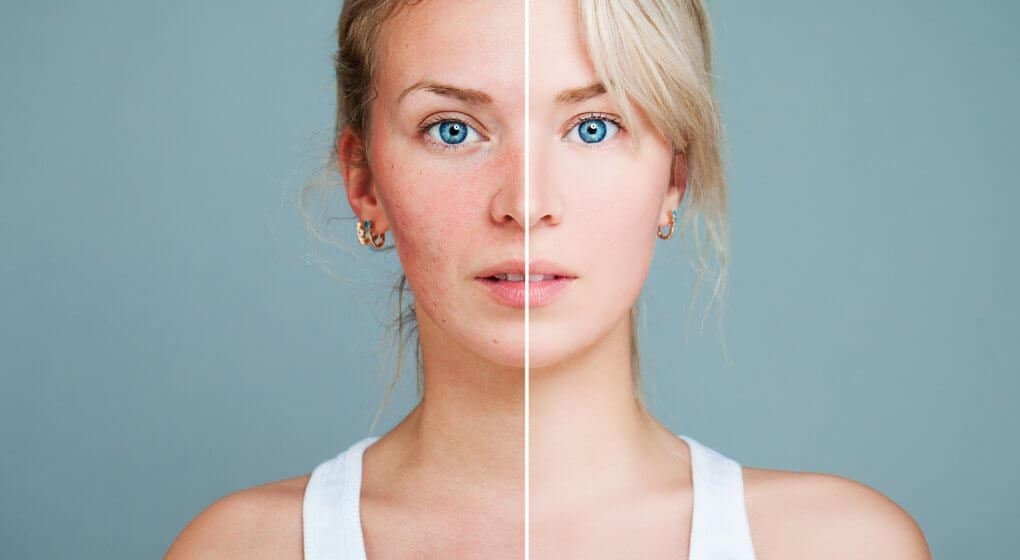 Rosacea is a skin condition that typically affects the face, but can occasionally also appear on the chest, scalp, ears, or neck. It's a chronic condition, and depending on the severity, it can be life-disrupting. Rosacea tends to flare and go into remission, rather than being a constant condition.

It can affect anyone, but it seems to typically affect people who are fair-skinned and tend to blush or flush easily. Women are diagnosed more often, but men usually have the more severe symptoms.

The exact cause of rosacea remains unknown.

One theory is that the blood vessels of the face dilate too easily, and that increased blood flow near the skin's surface makes it appear red and flushed. Other theories include sun damage beneath the skin, microscopic skin mites, skin bacteria, or irritation of follicles. An abnormal immune or inflammatory response may also be at play.

Research has identified two genetic variants that may be linked to rosacea, in areas associated with autoimmune diseases. However, this has not yet been formally demonstrated.

What Are the Symptoms?

There are several different symptoms. The most obvious is a redness of the cheeks, nose, forehead and chin that can come and go. This redness can become ruddier over time. If it's not treated, a persistent rash and pimples may develop.

The skin on the nose may thicken and become swollen and bumpy. The eyes can also be affected, causing them to become irritated, bloodshot or watery. Small blood vessels may become visible on the skin.

Some patients go on to develop the late phase of rosacea, which is characterized by gross tissue hyperplasia of the cheeks and nose (rhinophyma) caused by tissue inflammation, collagen deposition and hyperplasia of the sebaceous glands.

Ocular rosacea can precede or accompany facial rosacea and manifests as a combination of blepharoconjunctivitis, iritis, scleritis and keratitis, and causes pruritus, foreign body sensation, erythema and eye edema.

The triggers of rosacea symptoms are different for each individual, but generally include one or several of the following:

The goal of treatment is to control the symptoms, not to cure the disease. Avoiding the triggering factors helps and these may be unique to each individual patient. Some patients find that regular facial massage reduces lymphedema.

There are several ways to treat rosacea. Some of the most common professional treatment options include:

Antibacterial washes, topical creams, and antibiotic pills are treatments that are typically done at home, daily. Depending on your doctor's instructions, you may perform these treatments twice a day.

Laser treatment, pulsed-light therapies, and photodynamic therapy are all done under the supervision of trained professionals, in an office setting. They are usually not done daily, but do require multiple treatments spaced apart.

Isotretinoin is a prescription pill often used to treat acne, but can work for rosacea as well.

Over-the-counter topical gels or creams designed specifically for rosacea can help with the bumps and pimples, and subdue the redness to a degree.

In mild cases, rosacea may not require medical treatment. Depending on the severity of your symptoms, you may see improvement just by sticking to some of the basic skincare tips listed below.

In some cases, rosacea flare-ups can be managed without resorting to harsh, in-office treatments. These are some of the most common and effective at-home remedies.

Coconut oil has been used to treat various skin conditions for centuries. It’s rich in Vitamin E, and doesn't dry out your skin like many cleansers and chemical treatments. Vitamin E blocks free radicals from affecting your skin and reduces signs of aging as well as rosacea symptoms. Apply a thin layer of virgin coconut oil once a day after washing your face.

Apple cider vinegar makes for a great antiseptic skin cleanser, killing bacteria that can cause inflammation, but it should be used