▷ Is Rye Flour a Healthy Option?

Is Rye Flour a Healthy Option?

Food
Written by Sabrina Wilson and updated on May 7, 2018 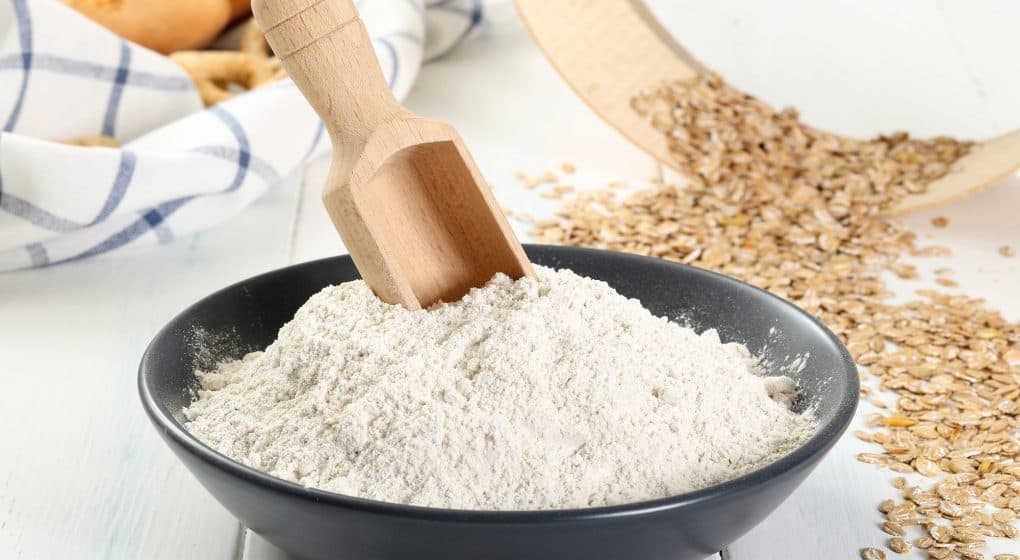 Over the last few years we have seen a huge shift within the health industry, in which we have moved away from low fat and high carbohydrate diets, towards a way of eating that is typically higher in proteins and fats, and subsequently much lower in carbohydrates.

This has come with an abundance of research demonstrating that the high carb way of eating once recommended by health professionals across the globe may actually be doing more harm than good.

This same research has also shown strong associations with a diet high in carbohydrate content and an increased risk of cardiovascular disease, and increase risk of weight gain and associated obesity, an increased likelihood of developing diabetes, and a general decline in health.

And interestingly, diets that were high in highly processed carbohydrates (such as flour and junk food) have been shown to increase the severity of this association even further.

As a result, there has been a huge increase in the number of flour alternatives hitting the market in recent years – many of which are not only suggested to limit the harmful health effects that come with consuming too much regular flour, but actually have a positive impact on health themselves.

And one these most popular options is rye flour.

What is Rye Flour?

Rye (also known as Secale Cereale) is a rich and hearty grass grain that has been used in cooking across Asian and European countries for centuries. With this in mind, it has been traditionally used in the production of flour based products such as bread, fermented foods such as sprits, or just cooked and eaten independently as a type of whole grain.

With this in mind, like most grains, people began to see the potential for rye to be used to create an alternative to traditional wheat-based flours, and thus Rye Flour was born.

Now, to understand where rye flour is proposed to derive its benefits, we first need to understand the anatomy of a single grain.

All grains contain three key components: a bran (the thick fibrous outer layer), and endosperm (the soft white middle section), and a germ (the embryo of the plant which germinates and allows the plant to reproduce).  Now it is important to note that in traditional grain processing, the bran is removed so that just the soft white endosperm is exposed.

Now while this leaves a soft and tasty grain that is easy to cook, the bran actually holds almost all of the nutrients within the grain – and by removing it, the grain loses nearly all of its nutritional value.

But the bran from rye grains is incredibly hard to remove from the endosperm, meaning that most of it remains during the processing of rye flour. As a result, rye flour is said to be much more nutritious than traditional flours, in which it exhibits a number of potent health effects.

Like all flours, rye flour contains a small portion of fat. This fat comes from the potent oils found within the bran and the endosperm, which actually provide some of the key nutrients that rye flour is so well known for.

Unfortunately, after a time, these oils can go quite rancid after being exposed to the oxygen found within the air. As a result, you can expect rye flour to last about 4-6 months before going bad – although it may last longer if you store it in an airtight container, and in a cool and dry place.

Does Rye Flour have wheat, gluten or yeast?

You see, rye is actually one of the three key grains that contain a type gluten, in which it contains the specific gluten protein Secalin. Secalin is actually a type of gluten that has been shown to cause irritation within the digestive tract of susceptible individuals, and renders rye flour completely unsuitable for gluten free diets.

Additionally, rye flour doesn’t contain yeast – although as yeast is a key component of the bread production process, rye bread is highly likely to contain it in small amounts.

While some Rye flour is completely non-GMO (genetically modified), there are many products available that use crops that have undergone genetic modification. As a result, if you are after rye flour that has not been genetically modified in any manner, it is imperative to look for those that have been approved as ‘non-GMO’ specifically.

Foods that are lower in GI tend to be considered healthier as they have been shown to help reduce chronically elevated blood sugar levels, improve sensitivity to the hormone insulin, and reduce the risk of developing diabetes.

High GI foods are those that have a GI rating of 70 or above, while low GI foods have a rating of 54 or less.

Now, it is important to note that while flours aren’t usually registered on the GI scale (as they are rarely eaten uncooked), the foods they are used to produce are. With this in mind, products made with rye flour tend to be much lower in GI than their wheat based counterparts.

For example, rye bread tends to register around 60 on the GI scale, while white bread made from wheat typically registers around 85.

Pretty simply, as rye flour doesn’t contain any animal based products, it is completely suitable for those on vegan and vegetarian diets.

Halal certified means that a specific food is permitted for consumption for those with Muslim beliefs. Most often all food is considered halal unless it is specifically prohibited by Islamic law or religious belief.

The paleo diet involves eating food that was only readily available in the Palaeolithic era – and given that grains where not readily available until we saw the huge advancements in agricultural technology that came with the industrial age, grains are not considered paleo.

With this in mind, neither is rye flour.

What are the health benefits of Rye Flour?

Despite Rye Flour not fitting in with some of the certain ways of eating mentioned above, due to its unique nature, it has still been shown to have a number of positive effects on health. As a result, we wanted to take an objective look at the research to determine where Rye flour offer us the most bang for our buck.

There is an abundance of research demonstrating that whole grains are much better for weight loss than their refined counterparts. This is because they are full to the brim with high quality fibre. This fibre, once consumed, not only slows digestion but also reduces hunger, making you less likely to snack throughout the day.

Through these two mechanisms, whole grains have been shown to have a very positive impact on weight management [1].

Taking this into consideration, while it is highly likely that replacing your normal wheat based flours with rye flour will assist in weight loss, we would like to see some more thorough human research before this can be said with any real certainty.

As mentioned in the above point, rye is full to the brim of specific types of high quality fibre that have been shown to cause reductions in hunger, while also increasing satiety after eating (making you feel fuller and more satisfied).

With this in mind, there is an abundance of research that has shown that rye products consistently have a positive impact on appetite throughout the day [2].

Is Rye Flour good or bad for candida?

Candida is a common type of yeast infection that can affect the mouth, intestinal tract, and vagina. Candida itself is a type of fungus that actually assists with nutrient absorption within the gut, but unfortunately, when it begins to overproduce it can break down the walls of the intestine and penetrate the bloodstream, leading to illness and digestive dysfunction.

With this in mind, while rye does not contain candida (as it is a yeast), its consumption does not appear to have any positive effect on candida infection either.

Now it is first important to note that both an inability to regulate blood sugar levels and inflammation are heavily linked.

Interestingly, research has shown that the consumption rye products (such as rye flour) causes declines in resting blood sugar, reductions in various markers of inflammation, and improved blood sugar management [3].

This suggests that rye flour has genuine capacity to help regulate blood glucose and fight harmful inflammation within the body.

Is Rye Flour good or bad for diabetes?

Given that excessive fat mass, resistance to the hormone insulin, and poor blood glucose management, are all heavily linked to an increased risk of diabetes, it stands to reason that rye products may have the ability to protect against diabetes by improving these factors.

Fortunately for us, this is something that has been shown time and time again, leading to the suggestion that swapping traditional flour based products with rye flour may provide an excellent addition to traditional diabetes medications and treatments [4].

Will Rye Flour Help With Gallstones?

There is some interesting research to suggest that some of the key fibres found within rye products may actually have a protective effect against gallstones – the only knock is that all of this research has been performed on hamsters [5].

So taking this into consideration, while rye flour does appear to have the capacity to reduce the risk of developing gallstones, we would like to see some human research in the area to confirm this effect.

Is Rye Flour good for your hair?

One of the stranger thoughts around rye flour is its suggested impact on hair health – with many within the health industry swearing that, by substituting the wheat-based flours within their diet with rye flour, they can cause a large increase in hair quality.

Unfortunately, there is no research to suggest that this is the case.

Does Rye Flour Have Anticancer Properties?

Some of the key bioactive compounds found within rye have been shown to exhibit an anti-cancer effect on cancer cells in laboratory based research. Interestingly, this appears to have some direct carry over to more ‘real word’ scenarios, wioth research showing that those individuals who consume rye products regularly tend to have a much lower incidence of cancer than those who do not [6].

This genuinely suggest that opting for rye flour and rye based products over more traditional wheat based products may significantly reduce your risk of developing cancer.

Like most flours, rye flour is extremely safe for consumption. The only real concern with rye flour is for those who have a diagnosed sensitivity to gluten, or a more severe manifestation, such as celiac disease. As rye does contain gluten it has the capacity to cause serious discomfort in these individuals.

Rye flour appears to be one of the best alternatives available to us at the moment when it comes to replacing wheat-based flours. This is based upon some extremely thorough research demonstrating that the consumption of rye can positively impact appetite, enhance weight management, reduce blood sugar levels and inflammation, all while simultaneously decreasing your risk of developing diabetes, gallstones, and even cancer.

It truly is an incredible product.

With all this in mind, if you are interested in giving rye flour a go, we strongly recommend you use it to replace any traditional wheat-based flours within your diet, and reap the rewards immediately.