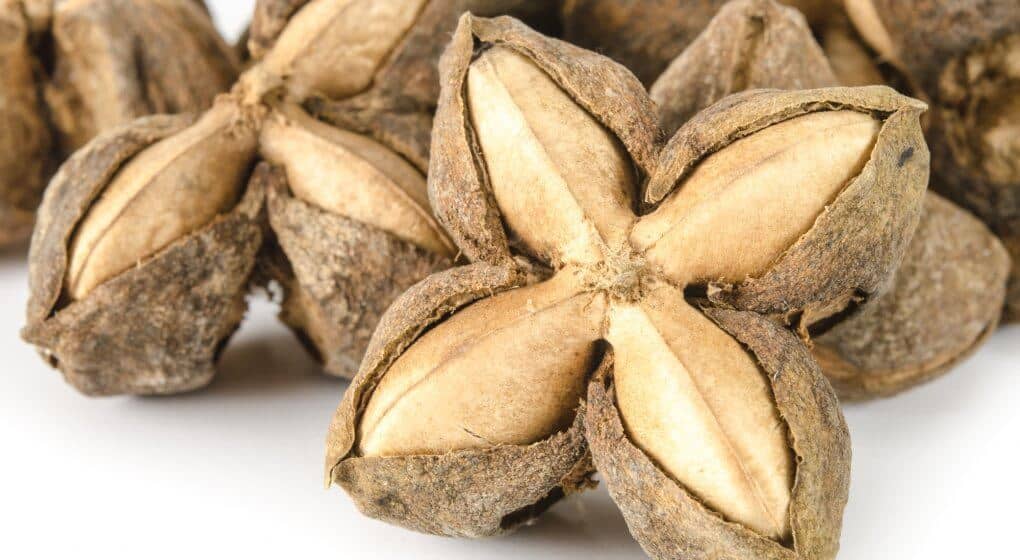 Sacha Inchi (scientifically known as Plukenetia Volubilis) is a climbing shrub that is grows naturally within the depths of the Amazon rainforest. This shrub is unique in that it produces a star shaped fruit that is completely inedible, yet contains seeds that is actually considered one of the worlds few true superfoods.

Sacha Inchi seeds are often called the Incan Peanut due to their small size and nutty flavour – although many would argue that they actually taste much better than traditional peanuts.

These same seeds were traditionally eaten by native Peruvian hunters and gatherers, where they were thought to increase endurance, boost energy, while also promoting improved health and increased prosperity.

And interestingly, they were not too far from the truth (well, maybe with the exception of prosperity…).

The seed of the Sacha Inchi is a protein rich nut that contains high levels of Omega 3, 6, and 9 fatty acids, while also providing a healthy dose of vitamin A, among a vast array of other essential nutrients.

Taking this into consideration, the seeds of the Sacha Inchi have been said to have a host of positive effects on the human body.

As mentioned above, the Sacha Inchi seed is quite high in protein – particularly considering it comes from a vegetable source.

Additionally, the proteins found within this seed are what is known as complete proteins, as they provide the full array of essential amino acids required for maintaining cellular health and function.

Taking this into consideration, this makes Sacha Inchi one of the few sources of complete vegetable based proteins on the planet – making it a perfect vegetarian or vegan alternative to more traditional meat based proteins.

In addition to this, the seed of the Sacha Inchi provides us with an excellent source of Omega-3 Fatty acids.

Omega 3 fatty acids are considered essential in nature, as they are required to promote the effective functioning of the human body through a number of different mechanisms. This includes promoting the efficient movement of essential nutrients through the walls of our cells, maintaining the health of our cardiovascular system, and allowing the development of cell membranes within neural tissue (think brain and spinal cord).

In conjunction with these essential macronutrients, Sacha Inchi also contains a number of vitamins and minerals that are difficult to obtain through other food sources – with specific emphasis on Vitamin A and Tryptophan.

Vitamin A plays an integral role in the maintenance of eye health, in conjunction with the reduction of macular degeneration, while Tryptophan is an important amino acid that has shown to improve sleep quality.

What does the research tell us about Sacha Inchi and health?

Considering its nutritional qualities, it’s not difficult to see why the Sacha Inchi seed is often considered a superfood by those within the health and fitness industry – and although there has only been limited amounts scientific research performed on this seed specifically, it has shown some promising early signs. Due to their high content of Omega-3 fatty acids, the consumption of Sacha Inchi seeds has been shown to have a positive impact on blood cholesterol levels.

Considering that having a poor blood cholesterol ratio has been shown to have strong associations with an increased risk of stroke and heart disease, this can only be considered a good thing. In addition to their effect on blood cholesterol, Omega 3 fatty acids are also known to have a positive effect on brain health and cognitive function.

By improving the quality of neural tissue, the consumption of Omega 3 fatty acids has been shown improve short term mental capacity, improve our mental state (reducing sensations of lethargy), all while protecting us against degenerative neural diseases such as Alzheimer’s disease [2].

With all this in mind, the regular consumption of Sacha Inchi is likely to have a protective effect on the brain, while also improving neural health and function in the short term. To build on this promotion of Omega 3 fatty acids even further, they have also been shown to have a host of benefits on the health of the cardiovascular system.

These Omega 3 fatty acids make up an integral component of the physical structures of the cardiovascular system (think veins, arteries, and capillaries). With this in mind, their consumption can cause vastly improve the function of these structures, resulting in lowered blood pressure, combined with more efficient blood flow throughout the body [3].

As such, the seeds of the Sacha Inchi can cause large improvement in cardiovascular health, resulting in a greatly reduced risk of coronary heart disease, and a reduced risk hearth attacks. And finally, as touched on briefly above, Sacha Inchi contains an abundance of the Tryptophan.

Tryptophan is actually an essential amino acid that is broken down and used to aid in the production of various hormones – one of which is Serotonin.

As a result, by consuming Sacha Inchi, we can cause large increases the amount of Serotonin secreted within the body. This is likely to result in significant improvements in sleep quality, combined with the various health benefits associated.

Does Sacha Inchi have any side effects? While there are unquestionable positives associated with the consumption of Sacha Inchi, it would be doing you a disservice if we do not mention some of the reported side effects associated with its supplementation.

In higher doses, some individuals have reported the consumption of Sacha Inchi leading to feelings of nausea, combined with some digestive issues such as bloating, diarrhoea, and stomach aches. Although it is important to note that these side effects do only appear to occur in high dosages, and often when the product is consumed in the form of an oil (as opposed to a roasted seed).

With this in mind, to mitigate any potential side effects we recommend you keep your intake to moderate levels, and make sure you are consume Sacha Inchi in the form of either raw, or roasted, seeds.

While Sacha Inchi has only become popular in recent times, the research suggests that this seed is more than just a dietary fad. Considering its capacity to improve health, increase mental function, and improve sleep quality, the benefits of its consumption are quite obvious.

It appears consuming Sacha Inchi in its seed form will greatly reduce the likelihood of having any side effects, while still providing all the associated benefits, making it the most suitable modality of consumption.

And of course, if you have had any experience with Sacha Inchi seeds we would love to hear about it, so please drop us a line.

2. McNamara, Robert K., and Susan E. Carlson. "Role of omega-3 fatty acids in brain development and function: potential implications for the pathogenesis and prevention of psychopathology." Prostaglandins, Leukotrienes and Essential Fatty Acids 75.4 (2006): 329-349. From:

 Nursing Leadership: The Qualities And Behaviors That Point To Success

[…] Sacha Inchi is a type of shrub that produces seeds that have recently garnered a lot of attention within the health industry, where they have been described as a key superfood. Sacha Inchi has the capacity to improve blood cholesterol levels [43], boost cognitive function [44], all while greatly increasing the health of our heart [45]. […]