▷ Baking Can Be Healthy: Guide to Choosing Healthy Flours

Baking Can Be Healthy: Guide to Choosing Healthy Flours 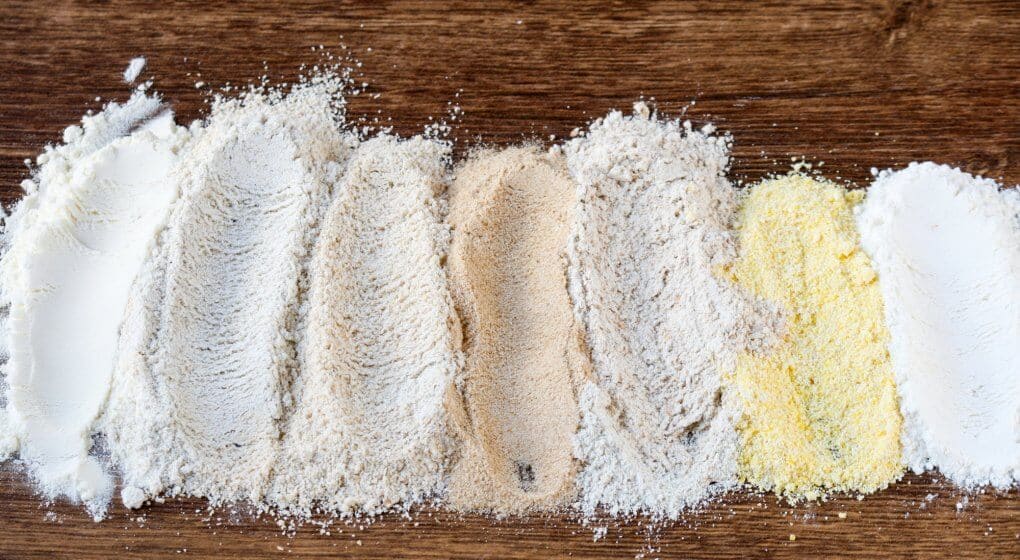 Over the last few years we have seen a huge shift in mindset from those within the health and fitness industry. With this has come the acceptance that dietary fat is essential to maintaining optimal health and function, combined with the suggestion that carbohydrates are the root cause of all our health related problems.

And this namely because not all carbohydrates are created equal

You see, some forms of carbohydrates are perfectly fine to be eaten on a regular basis. Many whole foods, such as starchy vegetables and whole grains, are actually quite healthy, and offer us with some serious nutritional value.

Refined carbohydrates on the other hand, are a completely different story

Refined carbohydrates were once whole grains that have been completely stripped of the entirety of their fibre content, along with almost all of their vitamins and minerals – hence the reason they are often referred to as ‘empty calories’.

With this in mind, as they have been refined, they also register extremely high in the glycaemic index (GI). This means that they are digested extremely quickly into the bloodstream, causing a rapid rise in blood sugar, and a subsequent increase in insulin secretion.

This also comes with a much larger risk of cardiovascular issues and heart disease – both of which suggest that refined carbohydrates may not be all that suitable for human consumption.

So where does flour fit in with all this?

Well, in short, one of the most commonly consumed refined carbohydrates is white flour.

White flour is made from heavily refined wheat, and is frequently used in a number of baking and cooking processes. Due to the way its produces, it registers extremely high in GI, and as such has strong associations with a host of health implications.

Unfortunately, white flour is also used in the production of many packaged foods that many people buy on a daily basis – which is obviously less than ideal.

In conjunction with this, white flour also contains the compound gluten.

Gluten is a type of protein found in grains like wheat, rye, spelt and barley (of which wheat is obviously the most commonly consumed)

There are actually two primary types of gluten; Glutenin and Gliadin

With this in mind, gliadin is the gluten protein that is known to cause some negative health implications in some people [2].

You see, with those individuals who have either celiac disease or a mild gluten intolerance, Gliadin is treated as an invading molecule when it enters the digestive system (and as such, is not recognised as a food molecule) [3]. As a result, the body attacks the gluten molecules in the digestive system in an attempt to completely remove it from the body.

While this does indeed remove the gluten from the body, it also causes a heap of damage to the cells of the digestive system. This can lead to irritable bowel syndrome, among a host of other digestive complications such as bloating, abdominal discomfort, diarrhoea, as well as headaches, tiredness, skin rashes, and even depression [4].

But fortunately for us, there are actually many alternatives to flour that not only don’t contain gluten, but also come from whole sources – meaning they don’t have the negative implications associated with the consumption of refined carbohydrates.

There are a number of viable alternatives to white flour that have been used successfully in cooking for centuries, With this, many of these flours are suitable for those individuals who are intolerant to gluten as they are completely gluten-free.

Coconut flour is an interesting option that has been increasing in popularity exponentially over the last couple of years. Made from ground and dried coconut flesh, it can be used in both sweet and savoury recipes to great success.

From a nutritional perspective, coconut flour is extremely high in fibre, provides us with a good portion of protein, and is rich in healthy monounsaturated fatty acids.  In conjunction with this, I should also note that coconut flour is completely gluten free.

As a result, coconut flour can improve the blood cholesterol ratio, and greatly reduce the risk of developing cardiovascular disease and illness.

Sorghum is a whole grain that has been eaten in certain parts of Africa for thousands of years. With this in mind, sorghum flour is literally made from ground up sorghum, meaning its production requires minimal processing or refinement.

As a result, Sorghum four is extremely nutrient dense, in which it offers a potent dosage of protein, iron, and the b group vitamins – all of which are essential to the healthy function of the body’s physiological systems.

Additionally, sorghum flour also contains an abundance of antioxidants that have shown to reduce inflammation and improve health, making it an excellent choice.

It is important to note that although sorghum flour is gluten free, it is also quite high in carbohydrate content. As such it is less suitable for individuals following the ketogenic or whole30 diet.

Almond flour is a fantastic alternative that is derived completely from ground up almonds. As a result, almond flour is extremely low in carbohydrate content, while also providing us with an excellent dosage of healthy fats.

As such, almond flour has shown to be a great option that that can actually improve blood cholesterol levels and heart health.

Additionally, this also makes it a fantastic gluten free option that is perfect for those on the paleo or whole 30 diet – and further considering its low carbohydrate content, it is also a great option for those who follow a ketogenic way of eating.

Oat flour has become an increasingly popular flour alternative as it is extremely simple to make (it is literally just ground up oats) and has a very low associated cost.

High in both carbohydrates and protein, Oat flour is not a great option for those looking to follow a low carbohydrate way of eating. But in saying that, for those individuals who don’t mind a higher carbohydrate intake, oat flour is a great alternative that contains essential nutrients that have shown to reduce risk of high blood pressure and high blood cholesterol.

It is important to note that Oat flour does often contain trace amounts of the protein lectin, which is closely related to gluten. As such it can cause some issues with those who are gluten intolerant or sensitive.

Another excellent gluten free option is brown rice flour, which has become quite popular due to its extremely high content of the B group vitamins , manganese, and phosphorous.  With this it is also completely gluten free, high in protein, and also rich in low GI carbohydrates.

With this in mind, as it is grain based and high in carbohydrate content, it is not a great option for those following the paleo or ketogenic diet BUT it does offer a great healthy alternative to traditional wheat based flours.

Tapioca is a type of starch extract that comes from the cassava root – a type of starchy vegetable native to Africa, Asia, and South America. Although Tapioca Flour is extremely rich in carbohydrates, it is completely free of glute, making it a great alternative for those following the paleo diet.

With this in mind, it is actually completely low in fibre, vitamins, and minerals meaning that it actually has very little nutritional value. Despite this, it is a great option to use in baking and cooking as it very closely replicates the texture of traditional wheat flours, without providing any of the negative health effects.

Despite the word ‘wheat’ appearing within its name, buckwheat is actually a type of seed. With this in mind, buckwheat flour is an excellent option for those following grain free diets such as the paleo, and is also completely gluten free.

It is also important to note that although buckwheat flour is a fantastic source of dietary fibre, it is also quite high in carbohydrate content. This makes it less suitable for those on the ketogenic diet.

Quinoa is a seed that has been making a bit of splash within the health and fitness industry as a high protein, gluten free, alternative to traditional whole grains. With this, quinoa flour simply consists of finely ground up quinoa seeds, and as such remains rich in essential proteins.

Despite its high protein content, quinoa flour is also extremely rich in carbohydrates. While this makes it an excellent option for those looking for a great healthy alternative to wheat based flours, it is not a great fit for the ketogenic diet.

Also known as ‘gram flour’, Chickpea flour is made from finely ground garbanzo beans, which are a member of the legume family. Because of its origin, chickpea flour contains an abundance of fibre, and as such has the capacity to improve the health of the digestive system.

Additionally, chickpea flour is also extremely rich in protein, while providing us with very few carbohydrates. This makes it an excellent option for those following low carbohydrate ways of eating (such as the ketogenic diet).

Additionally, as it comes from literally nothing but ground up chickpeas, it is completely gluten free.

Amaranth is actually an extremely unique plant that can be consumed in a variety of forms – one of which is obviously as a flour. Amaranth is essentially a gluten-free grain that grows native to Peru, where it is believed to have been harvested for up to 8000 years.

Amaranth is contains an abundance of carbohydrates, fibre, manganese, and protein, all of which are known to improve the function of the digestive system.

Although it is a great option for those who follow a diet with a moderate intake of carbohydrates, it doesn’t fit well with more strict ways of eating (with specific mention to the ketogenic and paleo diets).

Rye itself is a nutritious whole grain that has a lot of support within the health and fitness industry due its high nutritional content and ease of use. While rye flour does contain gluten, it is also extremely high in fibre, phosphorous and magnesium.

With this in mind, even despite its high carbohydrate content, rye flour registers quite low on the GI scale. This makes it a great option for those individuals looking to improve their health without making huge changes to their diet.

While rye flour is a healthy alternative to traditional whet based flours, it is not suitable for more restrictive dietary eating patterns.

What flours for what diet?

Because there are so many different types of flour available on the market, it can quickly become difficult to choose the flour that is right for you individually. As such, I have put together a bit of a table outlining the key factors we need to consider when choosing a flour that is the right fit for our diet.

Considering the various health effects associated with the consumption of refined carbohydrates, making a dietary change to a healthier flour is a simple and easy way to improve your health.

Bearing in mind that many of these alternatives are low in carbohydrate content, completely grain free, and contain zero gluten, there are suitable options no matter what diet you follow.