How to Get to Sleep Faster…Naturally 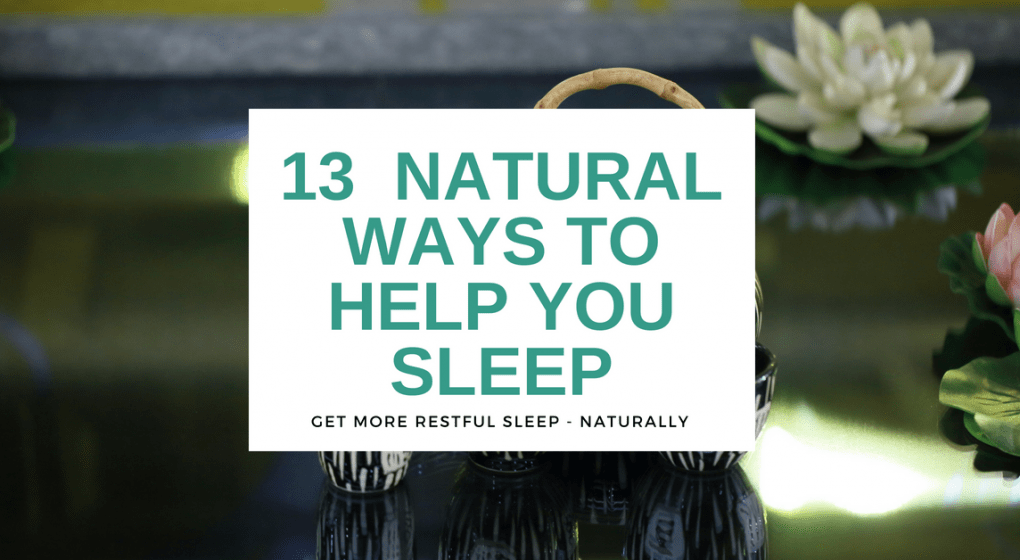 Over the last decade, there has been an abundance of new research within the realm of sleep. While we have certainly known for a very long time that sleep is incredibly important (if we don’t get enough sleep we literally start to fall apart), we didn’t really know why it was so important.

Jump to See the 13 Ways Now

Fortunately for us, with this recent research has come a lot more clarity around what sleep truly is, why as humans we need it so badly. And as a positive, this has also come with the knowledge on how we can go about improving it.

So, first and foremost, sleep has recently been defined as ‘a natural, normal, and reversible state of reduced responsiveness and inactivity, that comes in conjunction with an associated loss of consciousness.

As most of us would be fully aware, sleep tends to occur at regular intervals (for example, every night). With this, your body has an extremely consistent need for sleep, and as a result, any loss or delay in normal sleep can result in the need to ‘catch up’, with additional sleep. [1]

REM sleep is characterized by a higher frequency brain activity leads to associated contractions of the muscles found within the eyes, causing the eyes to move around in a rapid manner – hence the name rapid eye movement sleep.

Now, compared to REM sleep, most of your night is going to be spent in a state of NREM sleep – which can actually be separated into four distinct stages of sleep (stage N1, N2, N3, and N4). [2]

Stage N1 is the lightest stage of sleep. This stage typically lasts around 5 to 10 minutes, during which your heart rate begins to slow, and your muscles begin to relax. You are easiest to wake in stage N1. [15]

Stage N2 sleep is identified in by a rather significant changes in your brain waves. During a typical sleep cycle, N2 sleep can last up to 25 minutes, during which eye movement almost stops completely, and heart rate slows further. You typically spend the bulk of your night in N2 sleep.

Stage N3 and N4 are hands down the deepest stages of sleep. These stages (which are often lumped together) are both characterized by the onset of very slow brain waves known as delta brain waves.

Stage N3 and N4 are often known collectively as “slow wave sleep” (SWS). During these deep stages of sleep, the body is thought to repair and regrow tissues, build bone and muscle, and strengthen the immune system.

It is important to note that all stages and types of sleep are extremely important, and the transition from one type and one stage to the next is associated with what most would consider ‘normal and healthy sleep’.

As such, alterations in this flow of sleep is often associated with sleep disorders and associated sleep dysfunction.

The Health Benefits of Sleep

As I’m sure you can imagine, sleep is incredibly important, and any prolonged alterations in sleep can wreak absolute havoc with the body. With this in mind, we have collated recent research outlining how important sleep truly is, and how it does impact the body.

Does Sleep Help with Weight Loss?

First and foremost, there has been some interesting research around sleep and weight management.

Interestingly, poor sleep has also been shown to have a rather serious impact on appetite.

There are two key hormones that control appetite regulation in the human body – ghrelin and leptin.

In simplistic terms, leptin decreases appetite, while ghrelin increases in. Amazingly, sleep loss has been shown to cause a decrease in leptin secretion, combined with a subsequent increase in ghrelin secretion – causing rapid and severe increases in hunger and overeating throughout the day. [4]

Through these mechanisms, people who sleep less have also been shown to have difficulty losing weight, suggesting the extreme importance of sleep in weight loss scenarios.

Does Sleep Help with Mental Illness?

While the exact mechanism remains somewhat unclear, the vast majority of patients suffering from depression and anxiety also tend to suffer from severe sleep disturbances – most commonly a difficulty initiating and maintaining sleep. [5]

Throughout the day the brain and nervous system is constantly breaking down compounds for energy, while also producing chemical compounds known as neurotransmitters. During these metabolic processes, certain compounds are produced as byproducts, which can actually become toxic and inhibitory if they start to accumulate within these tissues. [6]

Amazingly, during sleep we experience an upregulation in waste removal from the brain and neural tissue, reducing toxicity and the associated side effects that come with these byproducts.

Now, with this in mind, sleep is integral for the maintenance of normal and effective cognitive function.

Moreover, sleep improves both cognitive function and memory in the short term – whereas a lack of sleep has been shown to inhibit cognitive function in a big way, including causing reductions in attention capabilities, language learning ability, cognitive reasoning, decision-making, learning, and long- and short-term memory capacity. [16]

Type II diabetes is a disease typified by an inability to manage blood glucose levels. This is often the result of a reduction in the sensitivity to the hormone insulin, which leads to chronically elevated blood glucose levels and associated inflammation – all of which wreak absolute havoc with the health of the body.

Interestingly, short term sleep deprivation has been shown to result in both reduced insulin sensitivity (thus heightened insulin resistance) and impaired glucose tolerance. Additionally, long term sleep deprivation has been shown associations with an increased risk of developing Type II diabetes – most likely as a result of these two key mechanisms. [7]

As a result, improving and maintaining a high degree of sleep quality is likely to both stave off the development of diabetes, while also assisting in its treatment.

Does Sleep Help with Heart Disease?

Individuals who sleep less than 5 hours per night (on average) have been shown to have significantly heightened blood pressure levels compared to those individuals who have what we would deem ‘normal’ and ‘healthy’ sleep patterns.

With this increase in blood pressure also comes large increases in incidence of heart disease, suggesting a direct link between sleep quality, blood pressure, and risk of cardiovascular incidents and disease.

As such, improvements in sleep are likely to have a hugely positive impact on heart health and normal cardiovascular function.

Chronic inflammation throughout the body occurs in response to various types of stress, including physical, lifestyle, and even emotional. With this, it can also be driven by various lifestyle factors such as poor diet and low activity levels.

Interestingly, adequate sleep has been shown to assist in the reduction of inflammation throughout the entire body. [8]

On the flip side of this, sleep deprivation has been shown to cause the secretion of numerous pro-inflammatory cytokines (proteins that increase inflammation), resulting in huge increases in global inflammation throughout the entire body. [17]

Considering this, it is easy to state that sleep itself is anti-inflammatory in nature, offering one of the best remedies to staving off inflammatory diseases.

Alternatively, good quality sleep has been shown to cause large improvement in the immune systems ability to fight infections and stave off disease, providing a clear demonstration that increasing sleep quality is a surefire wat to boost immune system function. [9]

Poor sleep patterns have been shown to wreak havoc with the body’s hormonal system, causing hormone imbalances across a number of different areas.

Firstly, poor sleep quality has been shown to result in the increased secretion of thyroid hormones TSH, T3, and T4. Over time this can lead to a suppression in reproductive function and associated declines in metabolic and reproductive health. [10]

Secondly, poor sleep has also been shown to lead to a significant reduction in testosterone levels in males. This can lead to associated declines in energy levels, mental health, and metabolic health, combined with increases in weight gain. [11]

And finally, poor sleep has also been shown to cause imbalances in the hormone estrogen, which can lead to infertility issues in females.

So, in short, sleep helps optimize hormone levels – which can have a huge impact on health.

There is some interesting research demonstrating that people who suffer from poor sleep quality and sleep problems (such as difficulty falling asleep, restless or light sleep, or early awakening) have an increased risk of cancer. [12]

Alternatively, improved sleep quality has been suggested to reduce cancer risk by enhancing the secretion of the hormone Melatonin.

Melatonin is an amazing hormone that has been shown to assist stave off the development of cancer by limiting the growth of tumorous cells, acting as an anti-oxidant within the body, preventing cancerous cells from migrating to other areas of the body, and inducing normal cell differentiation. [13]

While the exact mechanism is not clear, it has been hypothesized that adequate sleep can decrease inflammation throughout the gut and digestive system, causing a subsequent increase in digestive health.

Given that sleep is so extremely important for health and function on a daily basis, we wanted to give you some great options that you can implement if you want to improve your sleep completely naturally.

Magnesium is an essential mineral that plays numerous roles throughout the human body – some of which pertain to sleep.

You see, the consumption of magnesium has been shown to increase the activation of your parasympathetic nervous system, while simultaneously increasing the production of your primary sleep hormone melatonin – both of which can increase sleep quality in a very big way.

You can choose to increase magnesium in your diet eating magnesium-rich foods like almonds, spinach, peanuts, brown rice, or broccoli.

Additionally, you can also take a magnesium supplement before bedtime. Calm brand is a natural and very popular option, that is extremely effective. We should also note that supplementing with magnesium may result in some bowel issues (such as lo