The short answer is, do more of this...

...and consume less of these:

An old hymn claims “There is power in the Blood” and science has proven that to be so true.

Our bloodstream is actually our river of life.

The life-carrying blood constantly flowing through our bodies is something to which we seldom give a second thought...until we are bleeding. Then we pay attention.

Among other tasks, the blood carries red blood cells and distributes oxygen along with white blood cells that help fight infection.

Our blood is a mixture of water, cells, and plasma and is distributed throughout the body through miles of veins, blood vessels and capillaries. The blood also carries away waste.

The average human body contains about five liters of blood. That's more than a gallon. As efficient and life-giving as blood is, it can run into problems.

There are any number of diseases and maladies that can invade our bodies through the bloodstream and certain conditions that weaken our ability to stave off these attacks, such as a compromised immune system.

Within the blood are blood platelets; small cellular bodies that circulate through our systems while serving many functions.

They get their name from their plate-shaped appearance.

They are also the smallest of the blood cells.

The Importance of Blood Platelets

These tiny cells are an integral part within a complex circulatory system and are responsible for coagulating or thickening the blood in the event we spring a leak.

Without these microscopic cells doing their job, even a small cut could prove to be dangerous or even deadly.

Can a Low Platelet Count be Remedied Naturally?

The answer to that question is "probably, yes."

Studies show there are foods that can naturally and safely help raise our blood platelet count.

There is some dispute however among some health care professionals whether a given food can actually raise the number of platelets your body produces.

It is widely accepted however that an improved and/or healthier diet will help maintain the level of blood platelets the body does produce and merely by being healthier, more platelets will be produced naturally.

Others in the medical profession such a dietitians and doctors believe there is proof enough that certain foods do in fact, increase blood platelet levels.

The foods listed below are some of the more popular ones that seem to produce the desired result.

Papaya juice is an excellent and natural way of bringing up your blood platelet numbers.

A simple brew of papaya leaf tea is good for the blood overall and especially for increasing the number of blood platelets in the body [1] [2]. 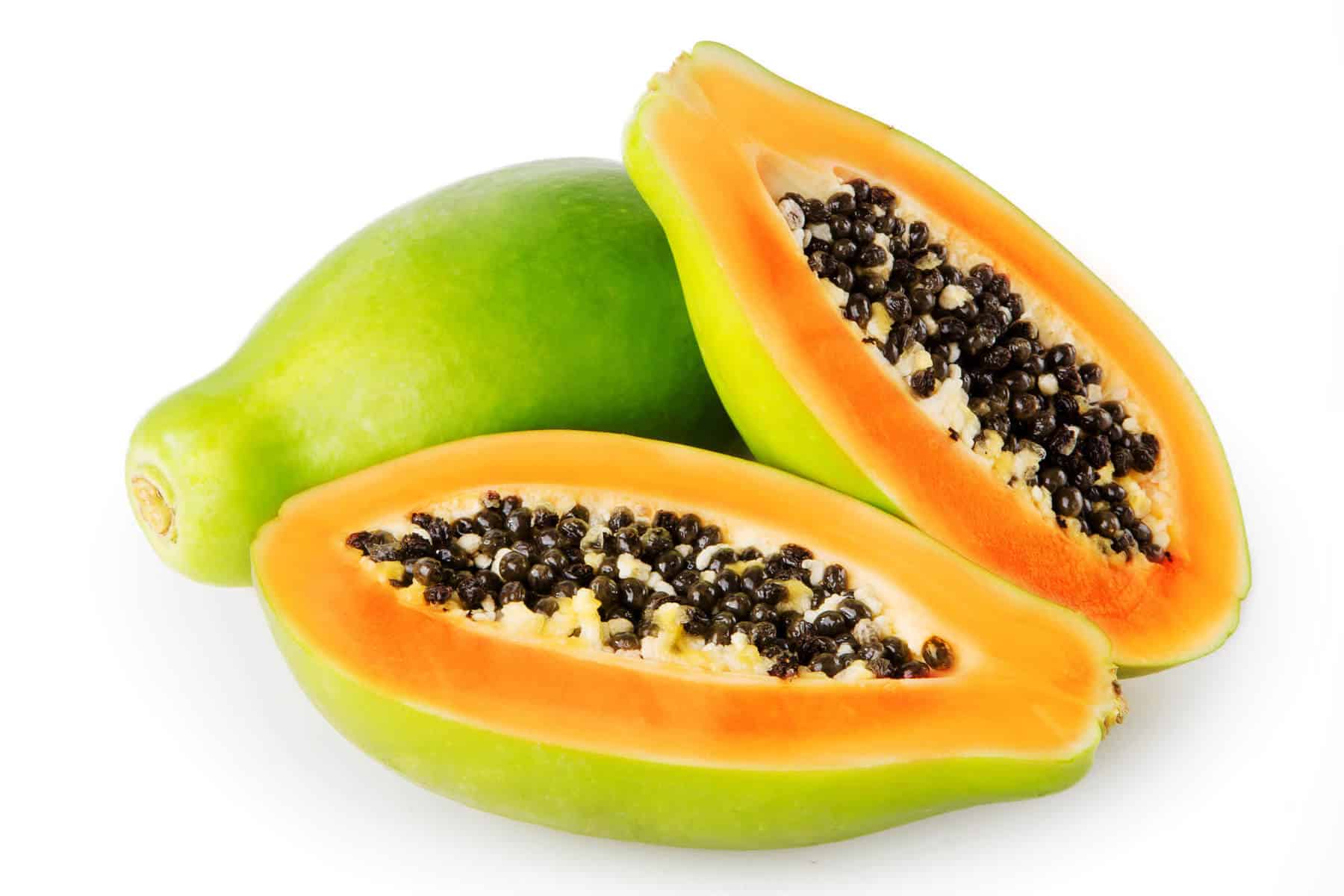 To make an effective tea simply place a few papaya leaves in some water and heat on the stove top. Cooking over a medium heat allows the essence of the leaves to be extracted slowly. Steep for 15 to 20 minutes then turn up the heat to a low boil until about half the amount of water you started with is left.

Two tablespoons twice a day of this powerful tea is all you'll need to help bring that platelet count back up to normal.

You can also purchase papaya leaf extract in the form of powder, capsules and teas.

Calcium is important to aid in helping the blood form clots which are necessary when there is external bleeding. Milk is an excellent source of calcium.

The calcium works with vitamin K, a seriously important vitamin, paramount in helping the blood to coagulate.

A lack of vitamin K can not only impede coagulation of the blood but has also shown to weaken bones which can lead to osteoporosis (brittle bones).

Consuming dairy products like cheese and yogurt along with milk are a great way to keep your calcium levels up and aid in the production of blood-platelets.

Folates or folic acids, are a vitamin of the B complex (B9) and are found in green leafy vegetables such as spinach, broccoli and turnip greens.

One attribute of eating these green leafy foods is they increase the hemoglobin levels in the blood thus addressing one of the underlying causes of low blood-platelets.

Other foods containing a high-density of folates are as follows.

A key to bringing up your plate levels is a good and healthy diet. Eating fresh foods that are less processed, lower in sugar and that contain less fat is beneficial in a myriad of ways in addition to raising platelet levels. A note of caution however, the intake of Omega 3 fatty acids found in fish should probably be avoided to some degree as Omega 3 has been shown to reduce platelet activation in the blood.

Foods to Avoid While Rebuilding Platelets

Processed foods that are high in calories and sugar and low in nutritional value should be avoided in general but especially when platelets are low.

Alcohol is another item that should be restricted or even eliminated altogether during the rebuilding process. Too much alcohol can damage bone marrow thereby decreasing platelet production.

Celiac Disease (a gluten allergy) is an autoimmune disorder that can negatively impact platelet production. If you have low platelets and are gluten sensitive, you may want to eliminate gluten from your diet.

Gluten occurs naturally in grains such as wheat, barley and rye. No end of baked goods are made using these grains.

Although the foods we eat can play a role in helping to produce more blood platelets, improving our overall health by diet and exercise is just as important.

Health professionals recommend we get at least 7-9 hours of sleep per night. Although that may seem like a lot of rest time, the extra hours are needed when the blood platelet count is low. Additionally, people suffering from a low count have less energy and the extra rest is necessary.

Staying hydrated is paramount to our overall health. Proper hydration keeps the body functioning properly and a healthy body will produce more platelets. Moreover, a healthy diet may help defend against platelet decreases.

Are There Medical Ways to Increase Blood Platelet Levels?

Indeed there are. There are medications and prescription drugs available that will raise the platelet count. These drugs are generally prescribed by a physician whose patient is afflicted with a low count due to a compromised immune system brought on by surgery or autoimmune disorders as well as certain cancers like Leukemia or Lymphoma.

Medical practices can be employed which will also raise platelet levels.

In more serious cases where there is heavy, or the risk of heavy bleeding, more aggressive measures may be required such as transfusions. There are two types generally administered.

A blood transfusion whereby new blood is introduced into the body or a platelet infusion where new blood-platelets are introduced. These are temporary measures designed to help the body get strong enough to create more plates on its own.

In extreme cases, surgery may be required. That operation is most often removal of the spleen or in medical terminology, a splenectomy.

At Organic Daily Post we want you to be healthy and safe. As with any other potentially serious medical condition, if you believe you may have low blood-platelets, don't rely solely on the internet for advice, direction, or ways to heal yourself.

While thrombocytopenia is easily treated, it can be quite dangerous if not treated properly. Therefore, ALWAYS seek the advice of a trained medical professional like a doctor or registered nurse before deciding to self-medicate.

How Many Platelets Do We Have?

Broken down, thrombocytes are the platelets and penia simply means there is a lack or deficiency of something, Synthesize the two you get a big word. Many people never realize they even have a low plate count. The noticeable problems don't usually start until the count drops below 50,000, when bleeding may begin. Below 10,000 to 20,000 platelets and the risk of serious bleeding is inescapable.

Where Do the Platelets Come From?

How Long Do They Live?

What Causes Blood-Platelet Levels to Drop?

There are a few common conditions that may account for a low platelet number:

How Do I Know if My Blood Platelets are Low?

This condition is not without its symptoms and they are relatively easy to spot. People suffering from low platelets may notice prolonged bleeding from a small cut or experience bleeding of the gums.

Nose bleeds from nowhere may be a sign of low blood-platelets. People with a low platelet count tend to bruise more easily and more often. Skin rashes often occur from bleeding tissue under the skin.

How to Get Rid of Bluegrass Weevils (Natural & Organic Methods)

Alan Ray is an independent writer who has experienced an eclectic career. He co-created and was the Head Writer for a reality television series as well as composing and producing the Theme song. He has written radio comedy, specials for National Public Radio, hundreds of blogs and no end of gardening and how-to articles spanning a galaxy of topics from aquaponics to the history of the flush toilet. He has also worked tirelessly on countless projects that went nowhere. Additionally, Alan spent years in recording studios in Nashville, Tennessee, where he worked as a staff songwriter for various music publishing companies. He is both a multiple BMI Award recipient and ASCAP award-winning songwriter, respectively. He has also written 5 books and is a New York Times best selling author (Non-Fiction/Humor). While touring the country doing book-signings, he did over 700 live radio interviews with every major radio station in the nation as well as the BBC and Radio Free Europe. Currently, he is a regular contributor to this site in addition to two of the top gardening magazines in Canada including a Medical Marijuana magazine and also a B2B mag. He enjoys small town life in southern Tennessee where his time is spent writing, messing with plants and laughing a lot with his lovely and quick-witted wife.

I have Ms & just notified by dr.my platelets are not right I am going to see a hematologist to see what’s going on. Can you tell me what I’m in for? I’ve been thru this before just can’t remember everything I know it all turned out fine

Talk to me , i will give you solution , as my son had same problem but now he has overcome

I have been suffering from ITP low platelets count from 2015 till now. I visited to hematologist who have me predison which increased plts from 20000 to its normal rate. But when he tell me to reduce the medicine the plts deceased. Now I am using predison 5mg every second day.

very good and I am going to take the Papaya tea and already taking most of other stuff since finding low (70) platelets in blood test 30 days ago. Im confindent the natural way will work for me. thanks for your article

Please give me the solution to my problem.

I was just told by my doctor that my platelets are down to 63 and nothing is being done. I have cirrhosis and once in a while my spleen is enlarged. What can I eat to bring them up really fast?

Thank you for the information. It is very good when people understand that pills do not solve all problems. Why do injections if you can eat enough foods that increase platelets? I understand that there are special cases, but for any not seriously ill patients, diet treatment is the perfect solution!

In more serious cases where there is heavy, or the risk of heavy bleeding, more aggressive measures may be required such as transfusions. There are two types generally administered.