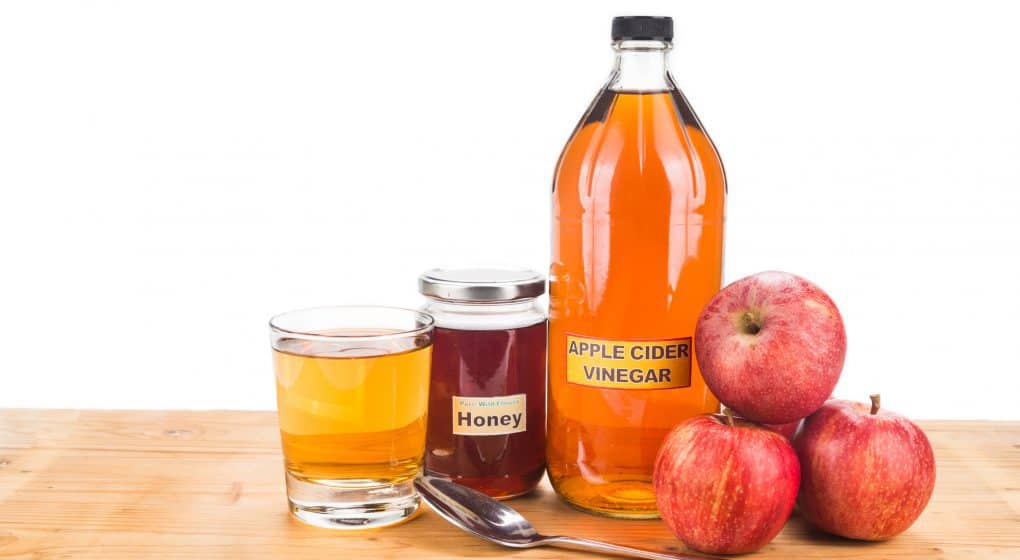 Apple cider vinegar has been described as a modern-day panacea, suggested to improve health, assist weight loss, kill bacteria, and even treat acne – but is it really all it’s cracked up to be?

With its suggested impact on health (and everything in between), apple cider vinegar has begun to replace many traditional compounds in a whole range of settings, where it is thought to offer a cheap and effective alternative to practically everything.

Taking this into consideration, we want to take an objective look at the research and really see how apple cider vinegar stacks up.

Apple cider vinegar is a liquid compound made by putting the juice of freshly pressed apples through a two-part fermentation process.

Firstly, apples are crushed and their liquid is extracted – a process that results in a simple and organic apple juice. This juice is then combined with yeast, water, and some key bacterial strains, and is then left to ferment.

This is our first fermentation process, and causes all the sugar found within the apple juice to be converted into ethanol.

After this first fermentation has been completed, a specific type of acetic acid forming bacteria (‘acetobacter’, for those interested) is added to the liquid, commencing our second fermentation process.

During this, all the ethanol is turned into acetic acid – which is responsible for the vinegar taste associated with apple cider vinegar.

During this second fermentation process, it is important to note that strands of ‘mother’ bacteria also form within the cider – it is this bacteria that is thought to give apple cider vinegar many of its health boosting properties [1].

Apple cider vinegar and cider vinegar are essentially the same product, with the only difference being that cider vinegar can be made from fruits other than just apples (such as raspberries and pears, and everything in between).

Both products undergo the same two-part fermentation process, and contain very similar qualities in regard to both their bacterial content and their acid content – with this in mind, they both offer the same health benefits.

It is important to note that they will have different tastes, and slightly different nutritional profiles – both of which are highly dependent on the fruit they use.

Despite still undergoing a two-part fermentation process, white vinegar is considerably different to apple cider vinegar in that it is made from fermented grains (with malt being one of the most common).

In conjunction with this, white vinegar also undergoes a much lengthier fermentation process, which results in a much higher concentration of acetic acid.

As such, white vinegar is much more acidic in nature than apple cider vinegar, and also contains much more of the mother bacteria previously discussed.

This makes its consumption quite difficult, as not only does it taste quite horrible, but its high acidity can disrupt the stomach and result in gastrointestinal issues – rendering it somewhat useless from a health perspective.

As its name would suggest, red wine vinegar is made from red wine. Normal red wine is essentially left to ferment for much longer than it would normally, turning it sour. Once this process is complete, it becomes red wine vinegar.

As an added bonus, red wine vinegar also contains resveratrol and polyphenols – two key compounds that exhibit anti-oxidant properties, and have been shown to reduce the risk of developing cancer [2].

Red wine vinegar is not suitable for cleaning.

Rice vinegar is a unique type of vinegar that is made from fermented rice, which is typified by a mild sweet flavour. With this in mind, it appears in a vast number of Asian dishes (such as sushi rice, pickled vegetables, and salad dressings).

Like apple cider vinegar, rice vinegar is thought to have number of positive effects on health, in which it is known to assist in weight management and lower blood pressure. This makes it quite comparable to apple cider vinegar in terms of the health benefits associated with consumption.

Regular vinegar is very similar to white vinegar in that it is often produced using grains, and also undergoes a much longer fermentation process. This makes it extremely harsh, and ideal for cleaning purposes.

As a result, it is not really suitable for consumption (not to mention it tastes absolutely horrible), and its health benefits pale in comparison to those observed with apple cider vinegar.

Kombucha is one of the newest health boosting beverages to hit the market, where we must admit it has made quite the splash.

Kombucha starts with a base of either black or green tea, which is then fermented for 1-2 weeks using a specific type of tea fungus known as symbiotic culture of acetic acid bacteria and yeast (or SCOBY for short). This fermentation process results in a mildly sour fruity flavor, while also boosting the number of healthy bacteria found within the drink.

With this in mind (and in a very similar manner to apple cider vinegar), Kombucha has the potential to improve digestive health and function, improve levels of blood cholesterol, and providen the body with a number of helpful antioxidants [3].

It is important to note that kombucha contains much more sugar than apple cider vinegar, making it less beneficial for metabolic health and weight management.

Witch hazel is in short, a plant native to north America (sometimes it is also known as 'winter bloom'). The leaves and bark from this plant are used to make a liquid compound that exhibits strong antibacterial properties. With this, witch hazel has therefore been suggested to promote skin health and tissue healing.

As a result, witch hazel offers an excellent way to treat acne, improve upon skin redness and swelling, and even slow age-related declines in skin quality [4].

In terms of acne and skin treatments, witch hazel is a much better option than apple cider vinegar – although it should not be consumed, suggesting that it lacks the other associated health benefits that come with the consumption of apple cider vinegar.

Green is often considered one of the healthiest beverages on the planet, as it is full to the brim of key anti-oxidants and polyphenols that have been shown to interact with the body in a myriad of different ways.

They are most likely best used together, so we can obtain the health effects from each (rather than choosing one over the other).

As previously mentioned, white vinegar undergoes a much lengthier fermentation process than pretty much any other type of vinegar. As a result, it is an extremely acidic product.

This makes ideal for cleaning (as it is a much harsher product).

It is also worth mentioning that because of its acidity, white vinegar offers a great organic alternative to harsh chemical based pesticides and anti-bacterial products as it has the capacity to kill off harmful microorganisms easily and efficiently.

Baking soda is the common name for a compound known as sodium bicarbonate, which is often used as a leavening agent in baked goods (in which it helps make dough rise).

Baking soda is quite unique as it can be used to aid digestion, treat insect bites and stings, control odours, and clean nasty stains. Baking soda is one of the few compounds on this list that are often combined with apple cider vinegar to enhance both its health and cleaning effects.

With this in mind, it is best used synergistically with apple cider vinegar to improve its effectiveness.

Coconut oil is full to the brim with essential fatty acids and healthy nutrients, and is one of the few foods that frequently gets classified as a ‘superfood’, as its consumption has been shown to boost health in a number of ways.

Considering this, coconut oil has been shown to promote weight loss, improve skin health, improve blood cholesterol levels, and even boost brain function (all in a very similar manner to apple cider vinegar) [6].

We should note that while the health benefits associated with its consumption are similar, coconut oil offers us with a much more effective skin treatment than apple cider vinegar (as its anti-bacterial and anti-oxidant properties have been shown to boost skin function, while the acidic properties of apple cider vinegar have been shown to hinder it)

Probiotics describe the live bacteria that live within your digestive system. These bacteria are often considered ‘good bacteria’ because they play key roles in enhancing digestive health and function, while also staving off disease and illness.

With this in mind, probiotics have been shown to enhance digestion and nutrient absorption, assist weight loss, improve heart health, and increase energy levels [7].

It is important to note that the concentrations of these bacterial strains are much higher in dedicated probiotic supplements, which as a result, are likely to be much more effective.

When it comes to apple cider vinegar, many people question whether getting organic apple cider vinegar is completely necessary – with the key difference being the fact that non-organic options have uyndergone a process of pasteurisation.

This process treats the product, ensuring that it does not contain any harmful pathogens or organisms. Unfortunately, this process also kills off all the healthy bacteria found within the product as well.

As a result, organic apple cider vinegar exhibits much more potent health effects than its non-organic counterpart (particularly when it comes to boosting digestive health and function), although their cleansing capacity is about the same.

Lemon water is exactly what it sounds like – water with the addition of lemon juice. As a result, lemon water contains a small number of phytonutrients, vitamin C, and fibre (all of which are required to support gut health and digestive function), and also contains citric acid, which is known to exhibit an antimicrobial effect.

As a result, lemon water demonstrates a similar capacity to boost the health of the digestive system as apple cider vinegar, but doesn’t offer any of the additional health benefits.

It is also important to note that lemon water is gentler on the stomach than apple cider vinegar, and therefore may provide a more suitable option for those with sensitive stomachs – even at the expense of those additional health effects.

Coconut vinegar is very much like apple cider vinegar in that it has gone through the same two-part fermentation process, but the initial liquid used is coconut sap rather than apple juice. As a result, it contains a similar amount of acetic acid, and exhibits similar bacterial properties.

Where it differs from apple cider vinegar is that it contains an abundance of essential vitamins and minerals that are known to assist control blood pressure, improve energy production, and fight off the formation of harmful free radicals within the body.

Within this, should state that most of the health benefits between the two are very similar, and your choice may actually come down to flavour – with coconut vinegar being slightly sweeter.

When it comes to acne, a long-time treatment has been the application of lemon juice to the affected area. This application has been thought to reduce oil secretion, kill acne spreading bacteria, and promote skin regrowth – all of which are very similar to the effects of apple cider vinegar when applied to the skin.

The only difference is that lemon juice is much gentler on the skin (as it is less acidic in nature), and subsequently it may provide a better skin treatment for those individuals with sensitive skin.

Given the growing popularity of apple cider vinegar, it should come as no surprise that it can now be obtained in the forms of pills and capsules.

These provide us with a very simple way of consuming apple cider vinegar (and obtaining all the health benefits associated) that is both easy in the stomach and quick to digest. As such, neither option is better than the other – they merely provide us with a different way of taking the same product.